I've been very busy in the shed the last few weeks preparing for round 2 of the DTRA flattrack series. After the electronic/coil ignition failed at Rye House my family clubbed together to buy me a brand new BTH magneto so the first job on my list was to fit that.

Naturally the TriBSA has nothing as sophisticated as timing marks so it was out with the timing wheel and piston stop. 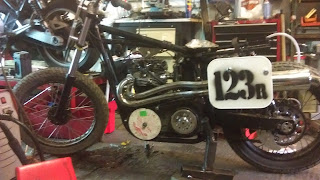 With the magneto installed and the TriBSA running I turned my attention to my Sportster. The reason for this is the DTRA are running a mini-series of Hooligan class racing, basically 750cc and above bikes with stock frames. In the states this class seams to be dominated by Sportsters and Harley are sponsoring then UK series. So seeing as I happened to have a Sportster halfway through a street tracker conversion it made sense (at the time) to enter.

The biggest problem is the engine looked like this; 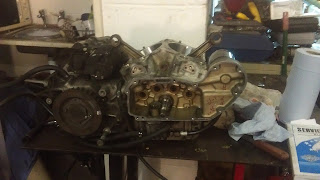 However after a couple of weeks of long nights in the shed I had a hooligan racer ready for when I had to leave for Peterborough on Friday evening. 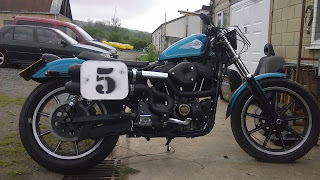 OK it hadn't actually been run other than a quick test firing of the engine but I had run out of time and had to leave.

I got to Peterborough just as access to the campsite was closing for the night so that was well timed.As I had been up since 6.30 and spent the whole day either working on the Sportster or driving to Peterborough I decided an early-ish night was a good idea, especially as sign in was 7.30.

Saturday morning arrived all too soon and I signed on and unloaded the Sportster. It was at this point that I noticed that the clutch perch on the TriBSA has somehow broken in transit. The Sporty then decided to join the fun as the gear lever broke as I was adjusting the gear lever while making last minute checks. The lever had basically broken in two, cracking on the side opposite the pinch bolt. I found that by doing up the pinch bolt I could still change gear I decided to go ahead with the racing on the basis that if I launched in second I wouldn't actually need to change gear for the whole race and I could put it into gear by hand rather than using my foot (which was in a motocross boot with the worlds heaviest steel shoe strapped to the sole).

So having signed in and passed tech inspection I nervously waited for practice, mostly because I was worried that the freshly rebuilt motor do something that made the broken gear lever pale into insignificance.

Practice went OK, with a 1200 lump I found the bike both easy to spin up and rather heavy compared to the TriBSA. The Hooligan racing saw me stuck at the back for all three heats but with only 11 riders competing I still made the final where I continued my form and came last.

With the days hooligan racing over I headed off to the auto-jumble to see if i could find a replacement clutch perch. I came up trumps when I ran into Mark on his stall who gave me a complete brake lever and perch that looked like it would do the job.

Saturday evening started with bodging the clutch cable and the brake lever to a point where it looked like it would do the job. I won't go into details but two sizes of cable tie were involved. With the mechanical problems sorted I headed off to the bar where I drank a modest amount of beer before heading to bed  at a little after 11 in an attempt to get a good nights kip before another 7.30 sign in. This plan was foiled by the freezing weather, I ended up wearing jeans, tee shirt, two hoodies and my Belstaff and I still felt like I was freezing to death.

So Sunday morning saw me get up bleary eyed and cold to go and sign on for the Vintage class. Tech inspection passed we were given a few practice laps to get a feel for the track. The best word to describe the track was slippy. In, I assume, an effort to keep dust at bay the track had been watered quite heavily and even at practice pace it was all to easy to either spin the back wheel, slide the back wheel, slide the front wheel or all three at the same time (or at least that is what it felt like). I came back into the pits grinning.

One of the things I have found when racing is how easy it is to get flustered and forget details like where on the grid you need to be. In an attempt to avoid this I wrote my starting positions for all three races on a piece of gaffa tape and stuck it on my tank. I then waited for first group of vintage bikes to go out, with the plan to start the engine once their race was underway so I was ready to go. Suddenly one of the marshals started pointing to me and indicating that I should go out. I was confused because as far as I was concerned I wasn't due until the following race. He came over and pointed at my race number on the running order. This was the point when I realised that my attempts to overcome pre-race flustering had come to nothing.

In my agitated state I had forgotten that my the hooligan races didn't run under your DTRA race number and I had made a note of the timing and grid positions for number 5 (my hooligan class number) and not 123 (my DTRA number). Now doubly flustered I set out and joined the starting grid in my place on the middle row.

This first race saw me finish in my usual last place. I was telling myself that its the taking part that counts.

I don't remember much about the second race, started at the front of the grid and finished last again. However I did have a couple of 'battles' with people overtaking me. Previously people had just come flying past but now I was able to hold my own, for a while at least, before they got past, which felt like progress but I was still telling myself that it was taking part that counted.

With two last places in the bag I figured that I wouldn't make the final and decided to just make the most of my last race. Before I knew it I was in my position at the back of the grid staring at the starting light (it just goes straight to green now red, amber, green sequence) like my life depended on it.

The light went green and I shot off, somewhere before corner 2 I actually overtook a couple of riders. I figured that they would be hot and my heels and pressed on a bit. Just before corner 3 I glanced behind me to see if they were behind me and didn't see them anywhere. I was now in front of at least two riders! I spent the rest of the race pushing hard enough to maintain position without letting ambition outstrip ability.

I came in fully expecting to be packing up for the day when someone said to me 'well done you are in the final'. It seems that by at least finishing (i.e. not crashing out) all three races and coming in ahead of a couple of riders in the last race I had done well enough to (scrape) into the top 12 earning a place in the final. I was chuffed to bits. 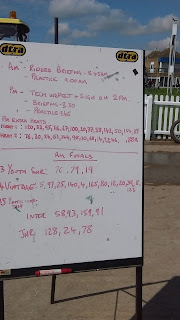 There was very little time to turn things around and before I knew it I was taking up my designated spot in the back of the grid. Having made the final I was determined to finish so I didn't pusj things as hard as the previous race and was the last to cross the finishing line but by my reckoning the fact that two bikes either failed to start the final or died just after starting and at least one rider crashed out I reckon I managed 9th overall which, on my 2nd meeting (I'm ignoring last months broken ignition system fiasco) is a big confidence boost.

It would be an understatement to say I was a bit chuffed by the result (even if it was mostly down to other peoples mishaps with mechanicals and gravity). 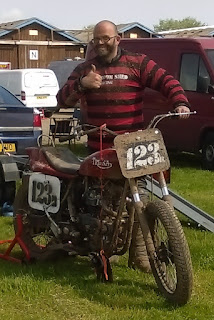 Next meeting is Greenfield on 11th of next month, and the week after that is Hells Race in Belgium.... bring it on!!!